●  As a business that supports equality, we are partnering with LeanIn.Org (a nonprofit organization founded by Facebook COO Sheryl Sandberg) to highlight the unfairness of the gender pay gap on Latina Equal Pay Day.

●  Women on average are paid 20% less than men. If you break the pay gap down by race and ethnicity, it is worse: Black women are paid 37% less and Latinas are paid 46% less.

●  Local businesses like ours are offering 46% discounts to all customers on Latina Equal Pay Day, November 2, to highlight the inherent unfairness of this gender pay gap.

●  You can learn more about the campaign by visiting leanin.org/equalpay.

DATA ON THE GENDER PAY GAP

Q: What is Equal Pay Day?
Equal Pay Day, April 4, 2017, marked how far women collectively needed to work into 2017 to catch up to what men were paid in 2016. To punctuate the day, LeanIn.Org worked with Lyft, Procter & Gamble, LUNA Bar, Salesforce, and hundreds of businesses to offer 20% discounts and special offers.
Because Black women and Latinas face an even larger wage gap, they need to work further into 2017 to catch up. On Black women’s Equal Pay Day and Latina Equal Pay Days (July 31 and November 2, respectively), businesses are offering larger discounts to draw attention to the unfairness of earning even less.

Q: Is this campaign advancing a political or partisan agenda?
LeanIn.Org is a non-partisan organization. LeanIn.Org is not promoting a specific proposal or piece of legislation as partof this initiative.

Q: What else is going on during Latina Equal Pay Day?
You can learn more about all of our efforts by visiting leanin.org/equalpay.

Q: What is LeanIn.Org? How do I get involved?
LeanIn.Org is a nonprofit organization founded by Facebook COO Sheryl Sandberg to empower women and give them
the insights and skills they need to be successful. LeanIn.Org runs programs that counter gender stereotypes and
advance opportunities for all women. LeanIn.Org’s main program is Lean In Circles, small peer groups that meet
regularly to encourage one another and learn new skills together. There are 33,000 Circles around the world, and they
are helping women go further together. Local Chapters of Lean In Circles are volunteer-run and operate independently
from LeanIn.Org. Visit leanin.org/circles to learn more.

Let customers speak for us

Bought this for my wife… she absolutely loves it. Looking to get something similar matching for my 2 daughters too. Quality is very good and no imperfections… great job!!!! I will be a repeat customer. 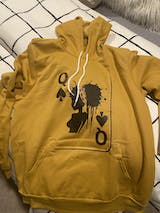 Nice quality and the fit was perfect!! They shipped my order right away.

This is an awesome T-shirt! It also came in a very nice package. Great quality and well designed. Well worth the price.

Saw this tee and it immediately reminded me of my wife. I just ordered it for her hoping she would like it and she was pleasantly surprised. She loved it & wore it that weekend when we went out.